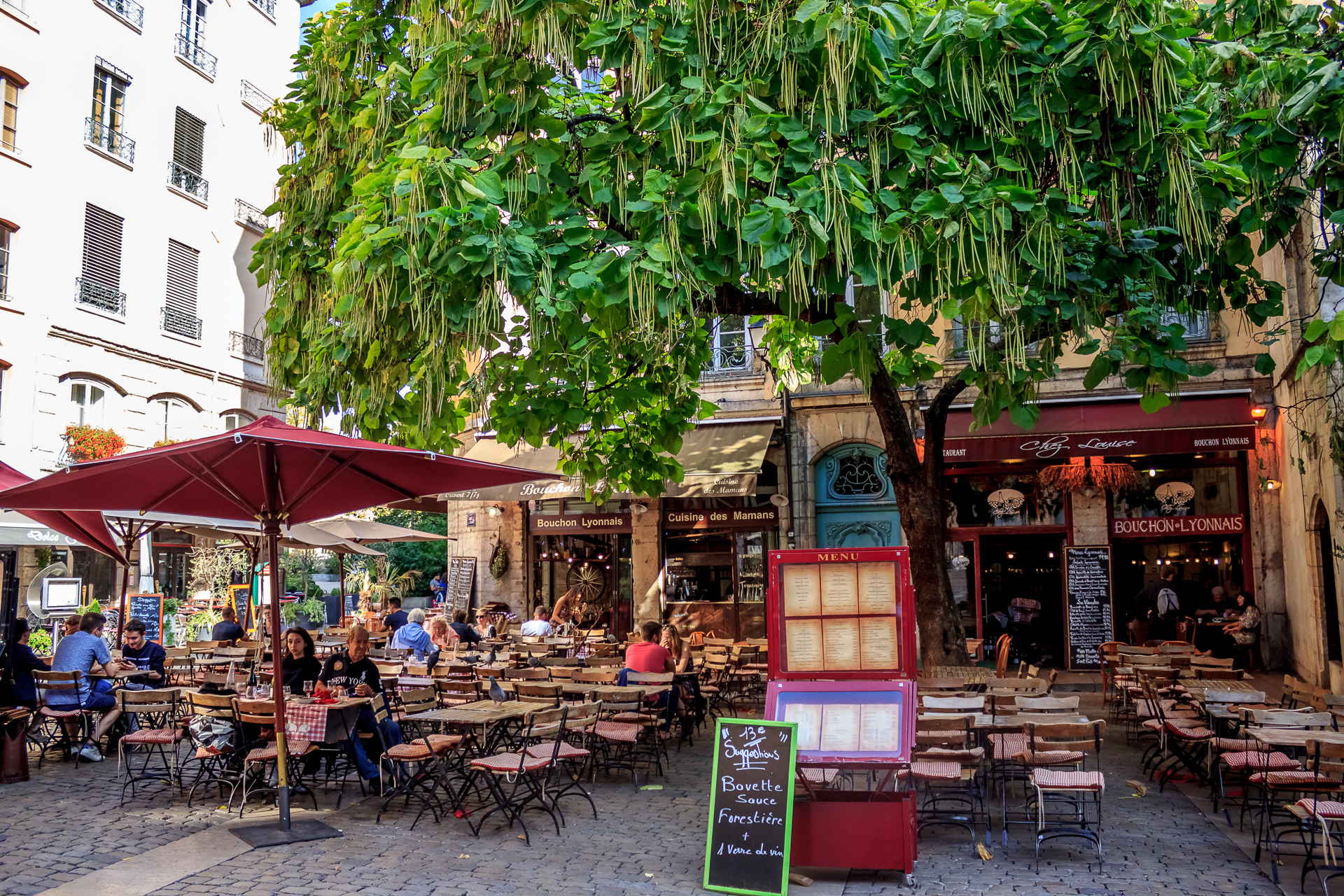 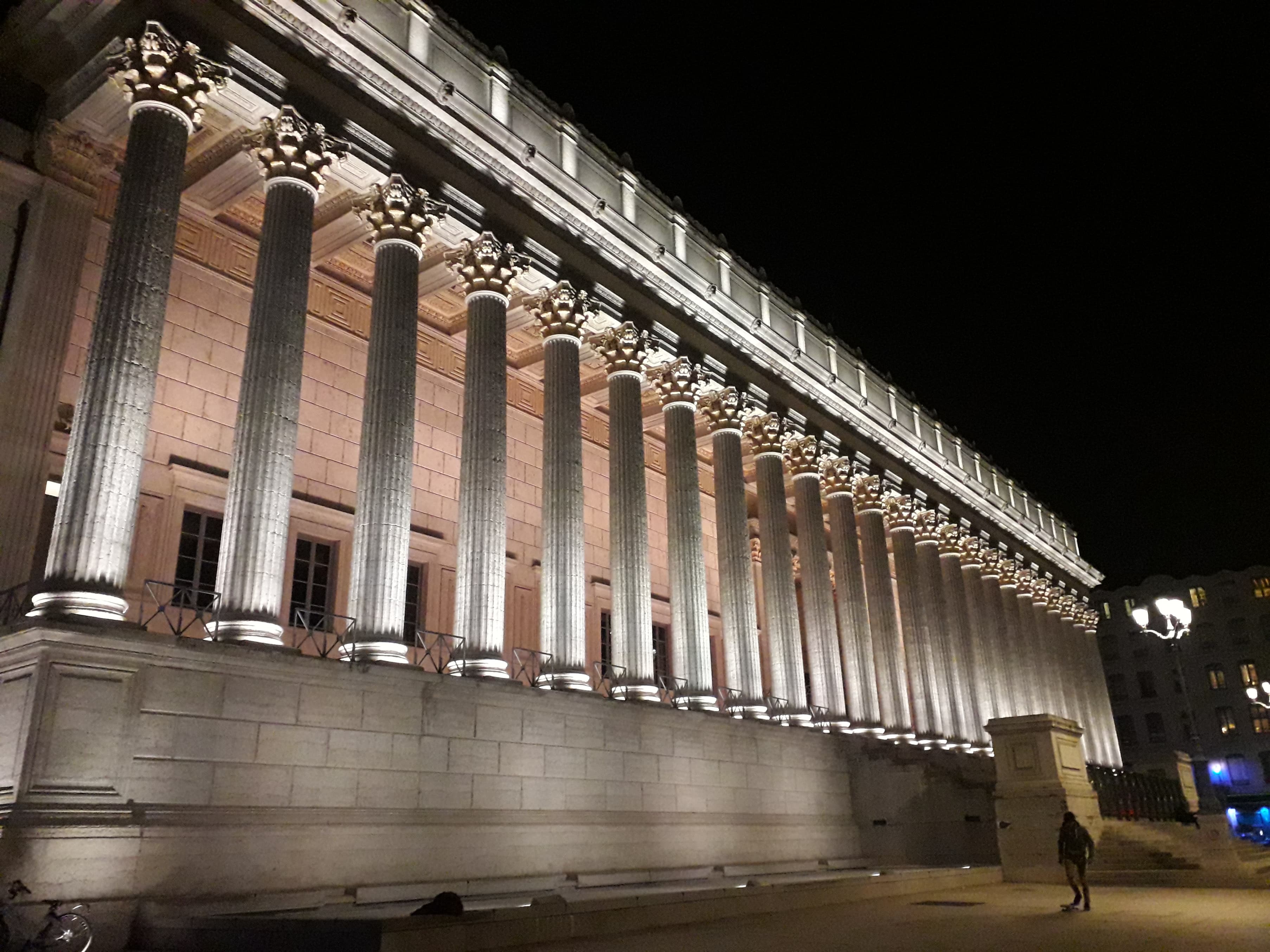 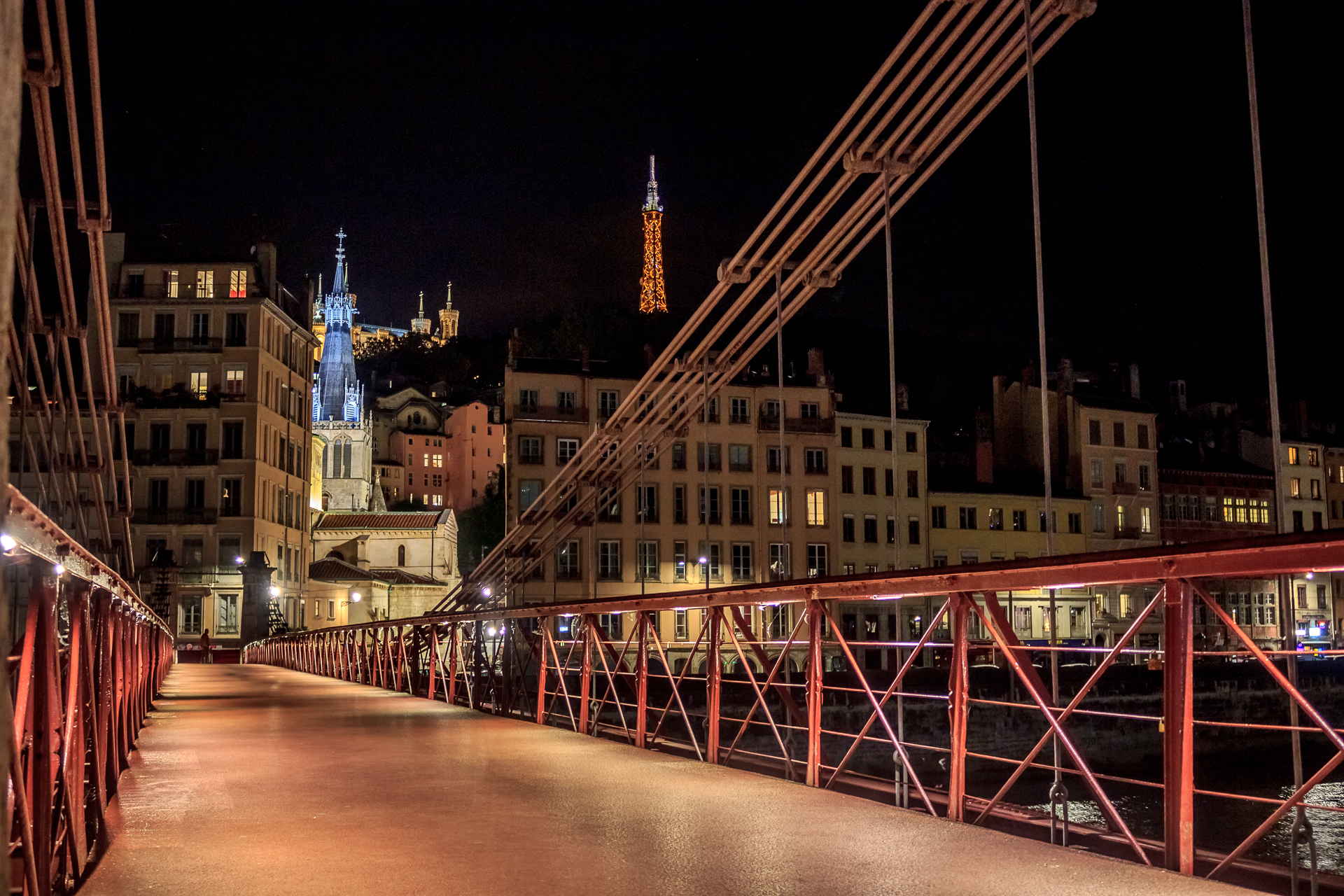 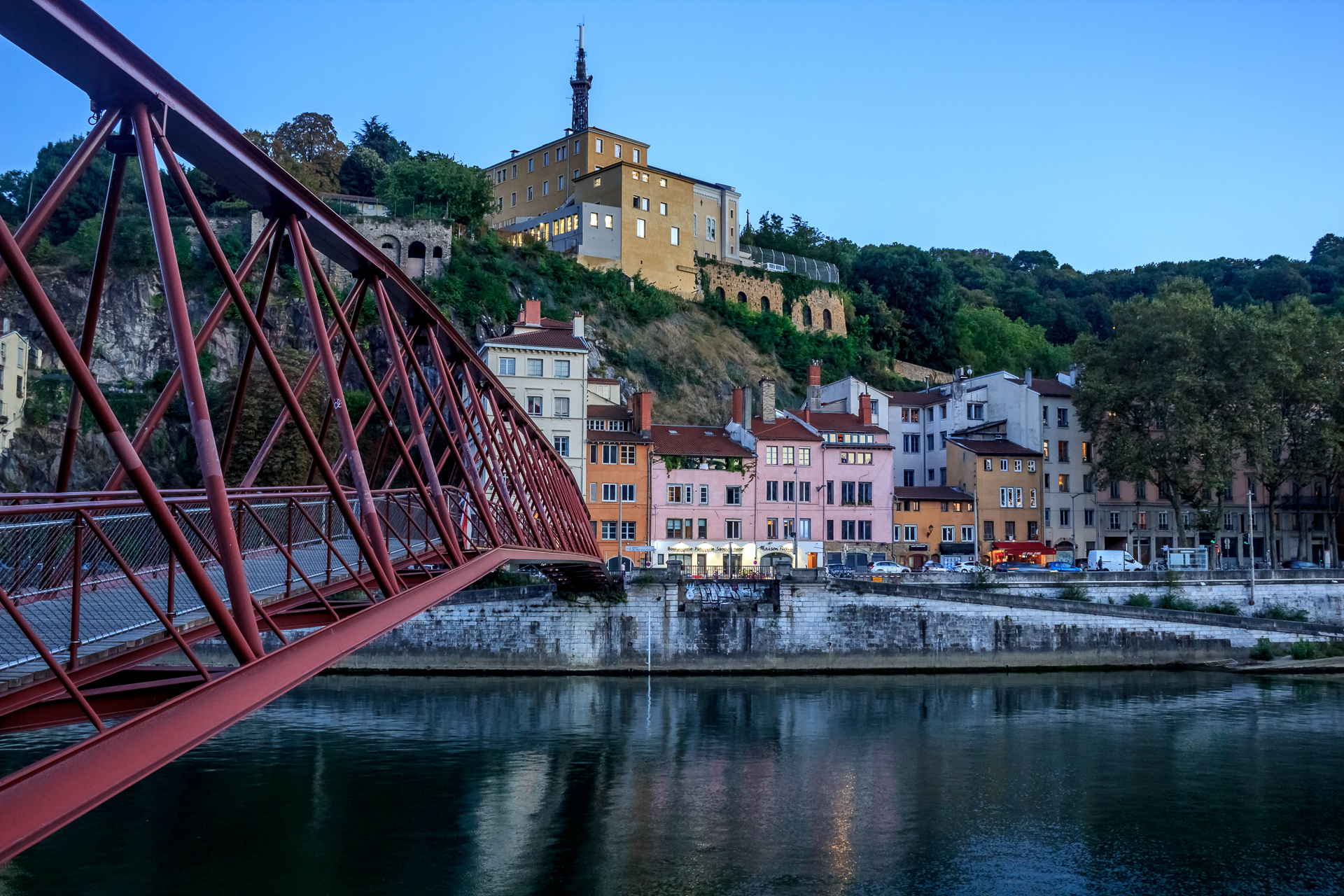 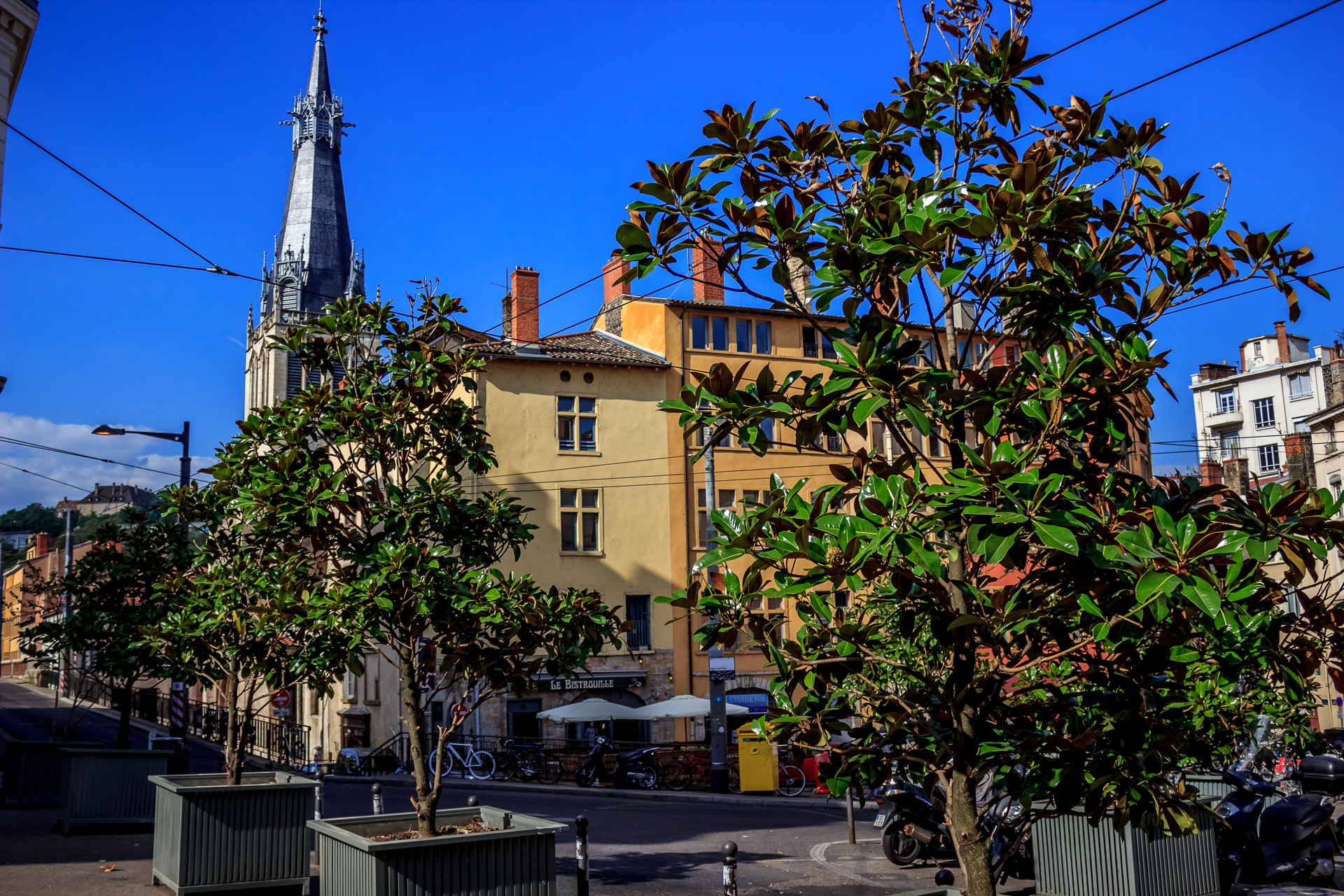 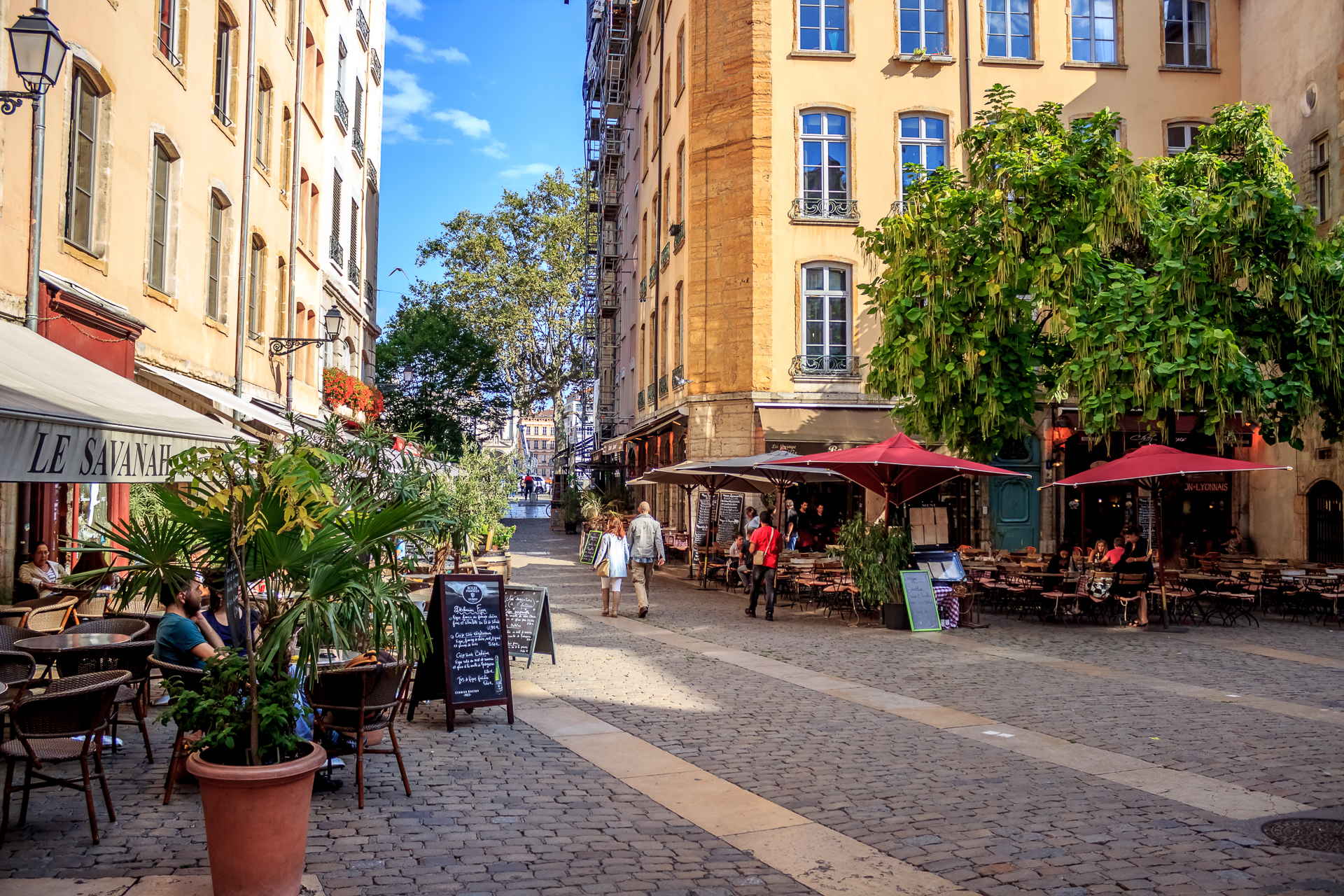 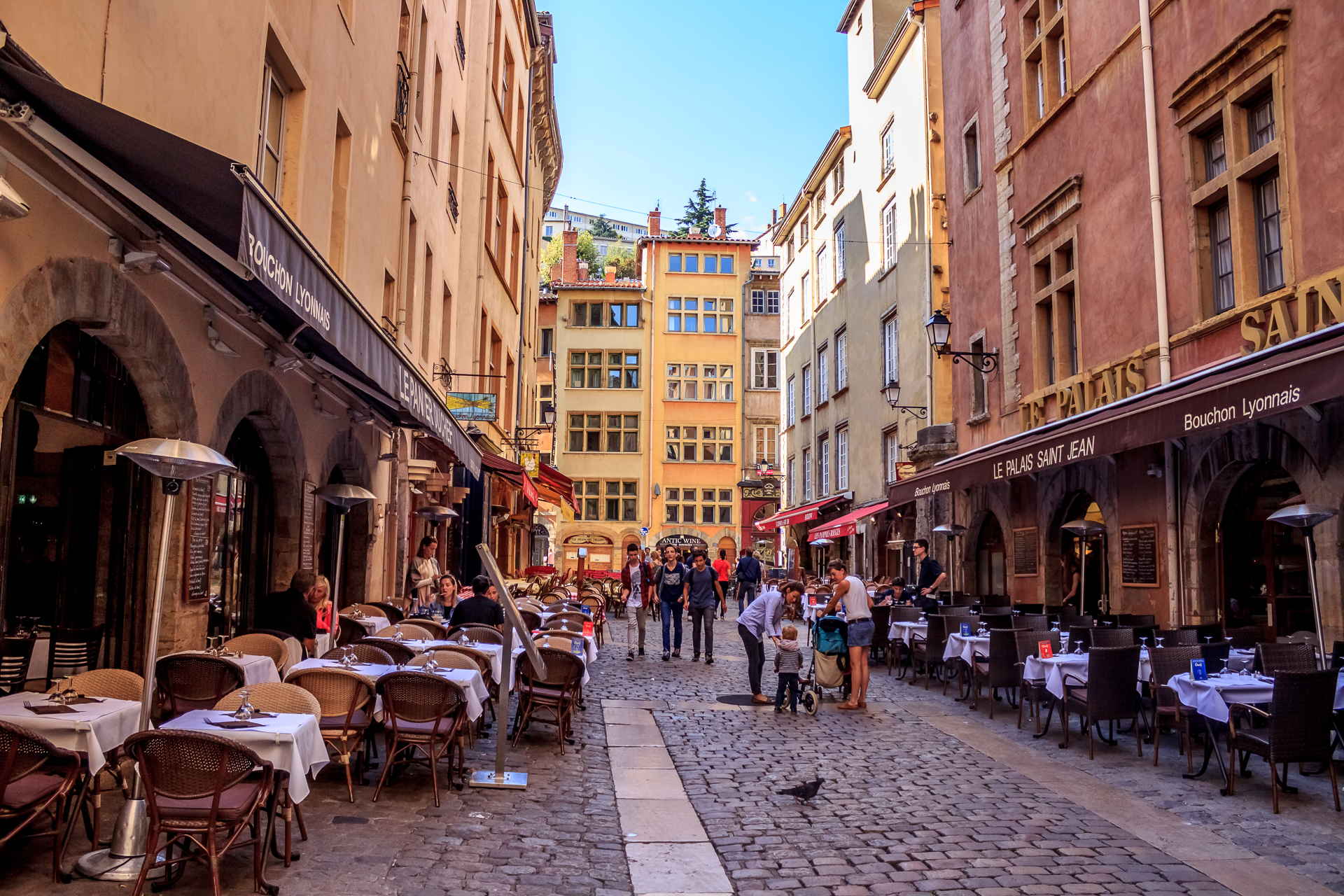 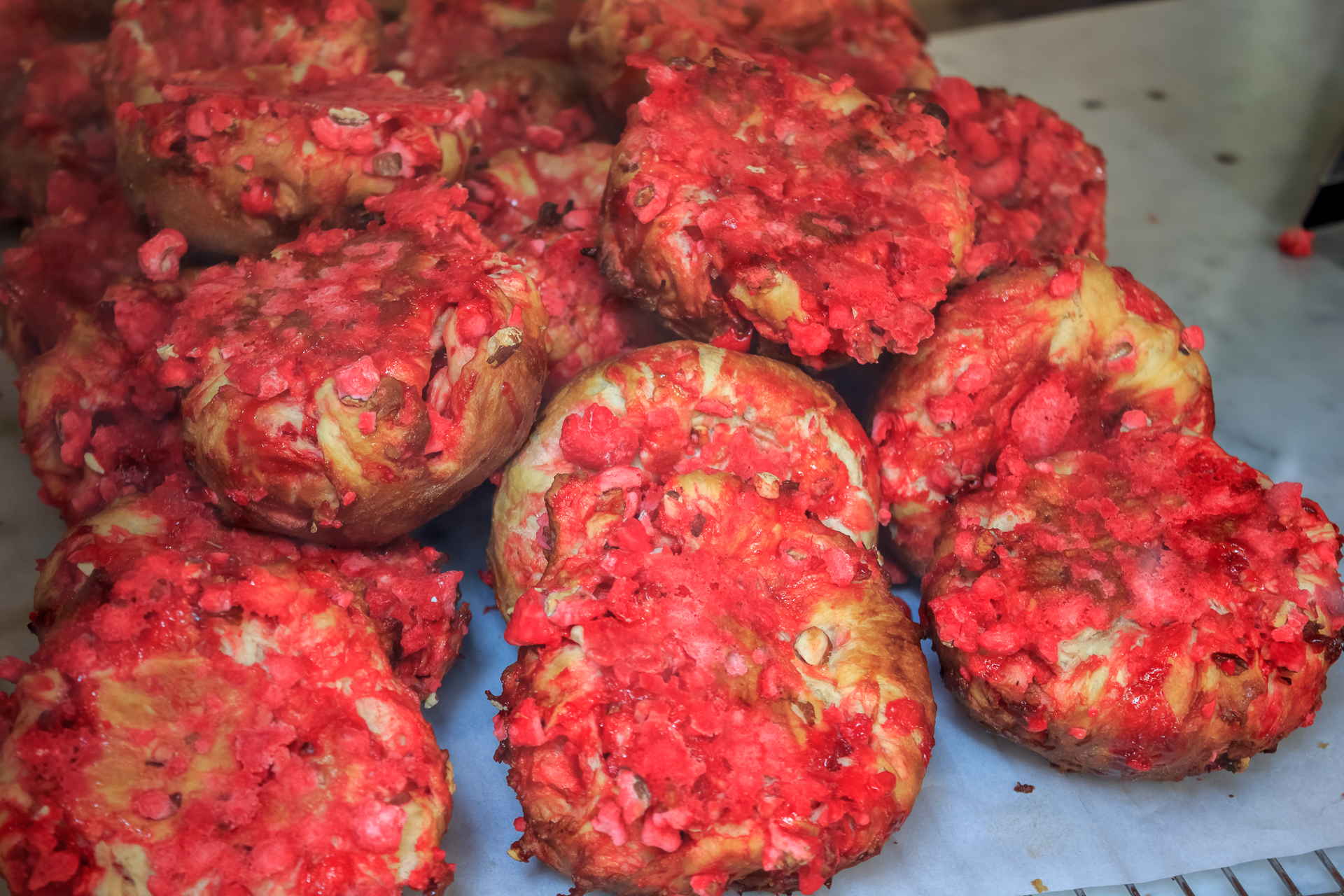 Need help to book your accommodation? 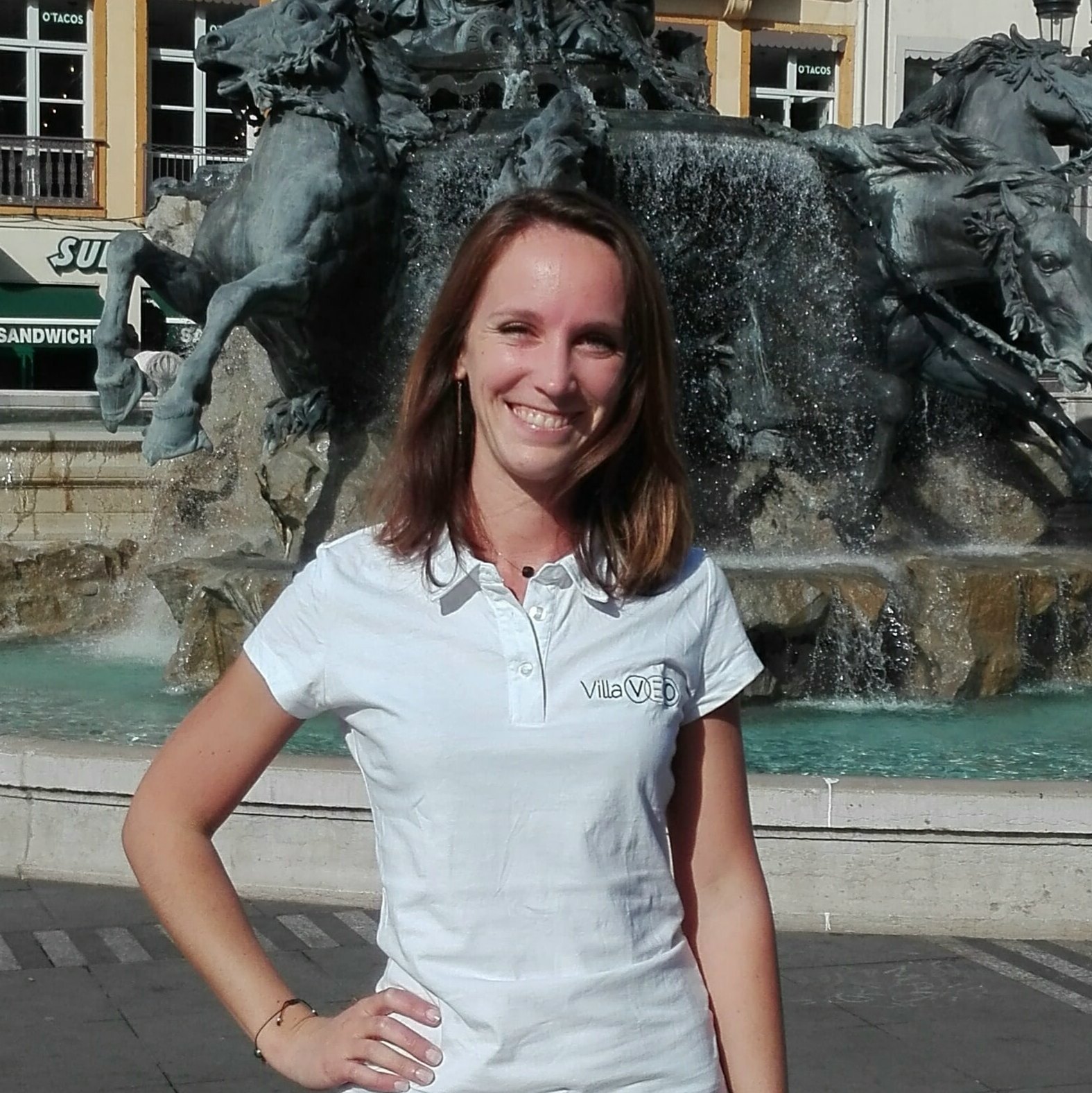 I am Caroline, explorer in Lyon I inspected 3 vacation rentals in Vieux Lyon 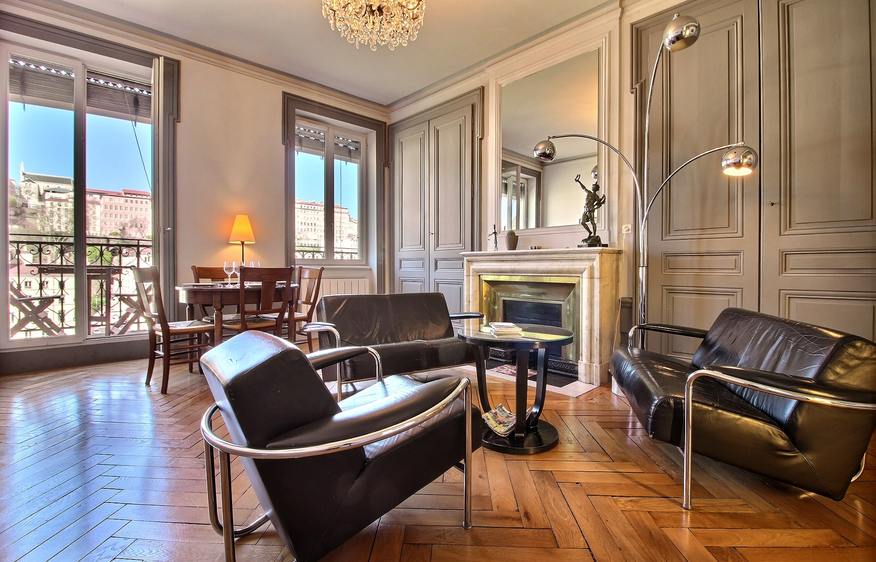 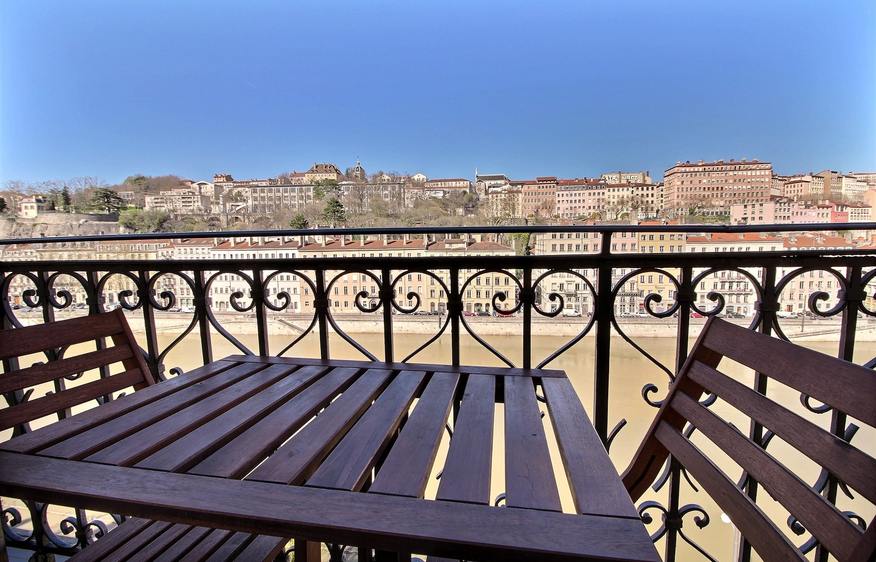 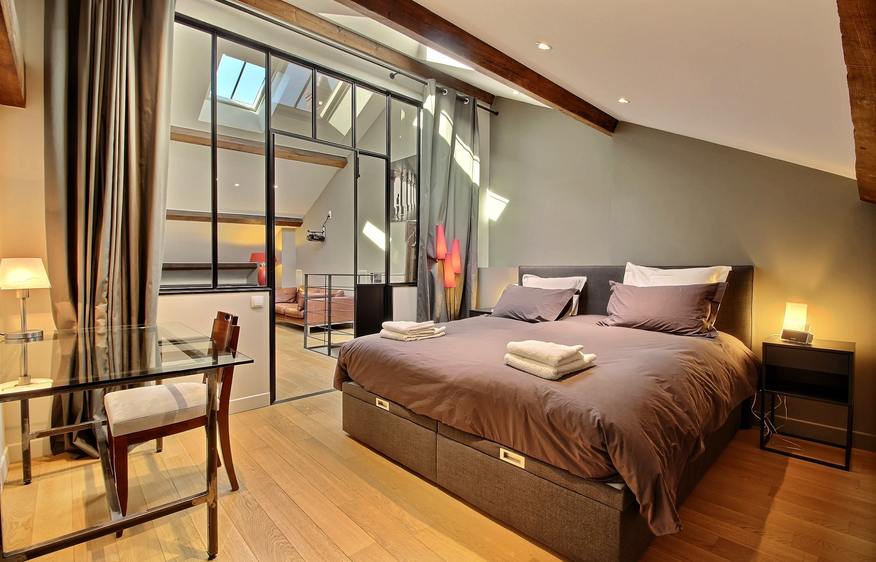 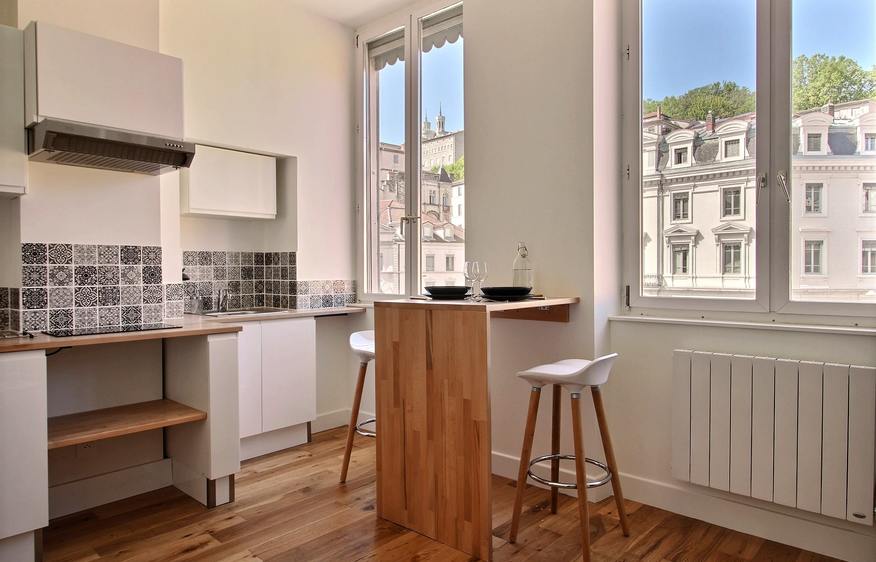 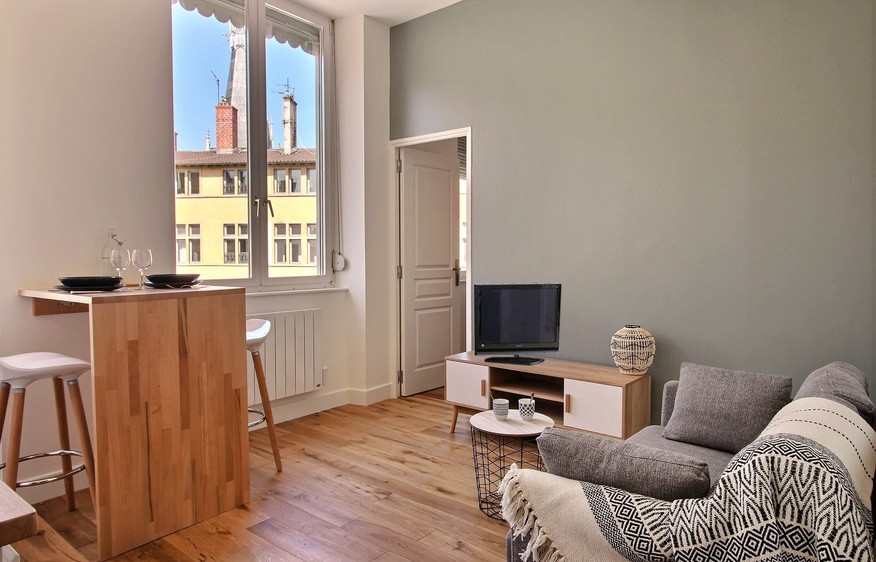 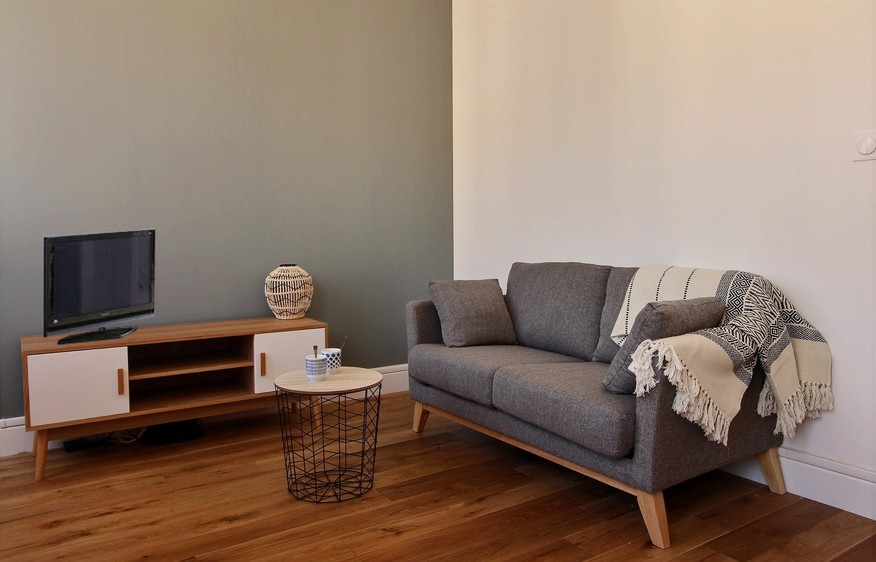 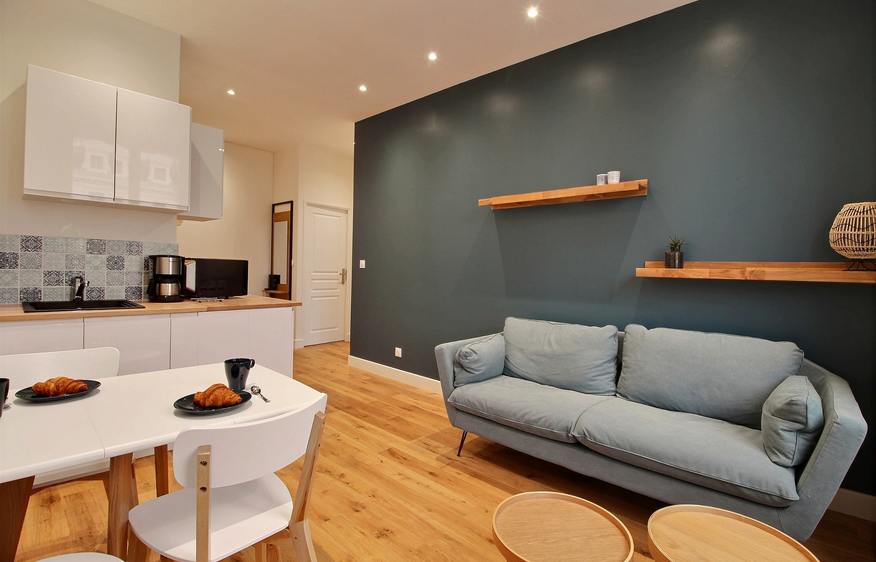 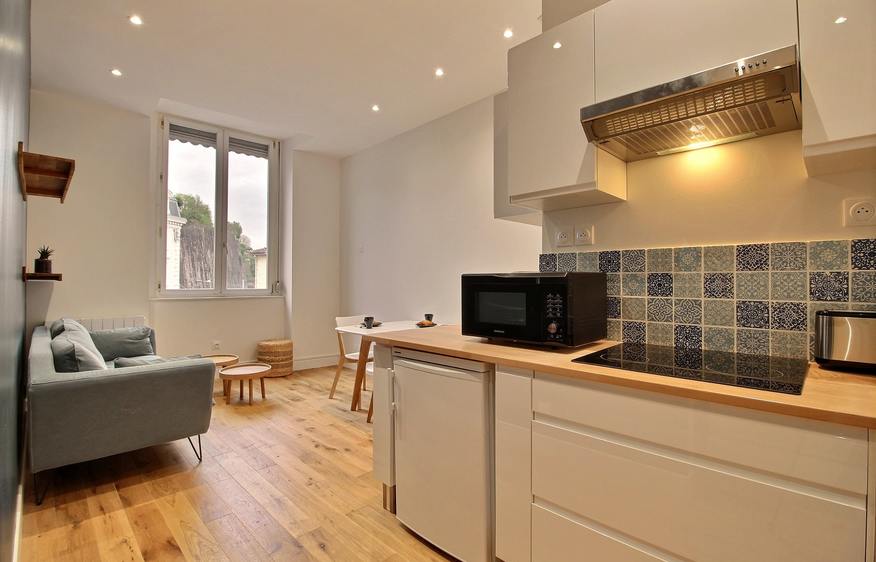 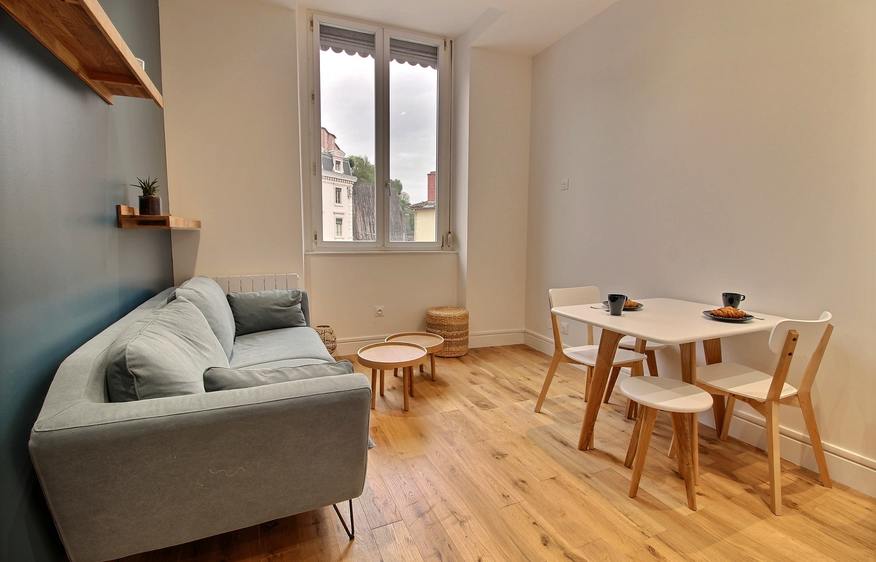 Where is the Vieux Lyon district located?

The Vieux Lyon neighbourhood is located on the right bank of the river Saône, in the 5th arrondissement of Lyon. This Renaissance district is full of sumptuous monuments that give it a unique medieval charm. The district is classified as a UNESCO World Heritage Site as the largest Renaissance district in Europe, after Venice. The old city of Lyon extends from Saint Georges in the South to Saint-Paul in the North, passing through Saint Jean. You will enjoy renting an apartment in Vieux Lyon.

The districts of Vieux Lyon

One of the best activities during your weekend in the old city of Lyon is simply to.... stroll through Vieux Lyon. Indeed, the different areas that make up this district are worth a visit.

Saint-Paul is the district located north of Vieux Lyon, at the bottom of the Fourvière hill. This charming quarter of the old city is built around the romanesque and gothic church of Saint-Paul de Lyon. A central square animates the neighbourhood thanks to the many cafés and restaurants on the place. During your visit to Vieux Lyon, take a break at the café théâtre called Espace Gerson.

The Saint-Paul train station is situated on the central square and serves the communes of western Lyon (Saint-bel, Tassin, l'Abresle, Roanne, Brignais, Lozanne...).

Exploring the Saint-Jean district in the old city of Lyon

In the central square of Saint-Jean district stands a remarkable gothic cathedral. More than 80 meters high, this cathedral impresses by its eminence and beauty. The Saint-Jean district in the old city of Lyon is a labyrinth of narrow streets and traboules where art galleries and craft shops abound. While you are enjoying a trip in Lyon, take a look at the Lyon Court of Appeal and its 24 columns. You may be impressed by this magnificent building. The museums of Gadagne are also a must-see in Lyon to understand the history of Lyon and discover the arts of puppetry.

Discovering the points of interest of Vieux Lyon

Visiting the Traboules of the old city of Lyon

When you stroll through the narrow streets of Vieux Lyon, don't hesitate to open the doors and look for hidden passageways called "traboules". You will be surprised to discover hidden corrners and paths. You can also opt for guided or narrated tours to make sure you don't miss any traboules. If you want to discover Lyon with family or friends, you can book a visit as a game. Indeed, Qui veut pister ? allow you to discover the old city of Lyon by trying to find clues to solve an investigation. You must book in advance on the website quiveutpister.com.

The Fourvière hill offers an exceptional panorama of Lyon. Notre-Dame de Fourvière basilica is one of the historic monuments listed as a UNESCO World Heritage Site. The visit of the basilica is free, and the most courageous can climb on its roof to admire an even more spectacular view. Many musical activities or conferences take place on the Fourvière hill. It is possible to reach the top of the hill by a funicular, called "la Ficelle" or by walking to the top.

Coming down from the basilica of Fourvière, you can access the famous Roman theatres and the Gallo-Roman Museum.

Relaxing in the parks of Vieux Lyon

Vieux Lyon district is full of parks and gardens that will allow you to take a break during a day of visiting Lyon. Reading, strolling or taking the most beautiful picture of Lyon are all reasons to discover the parks of Vieux Lyon. How to talk about the most beautiful parks in the old city of Lyon without mentioning the gardens of Gadagne. Their location within the walls of the Gadagne museums confers a very special charm on them. They are accessible during museum opening hours.

The Curiosities Garden is located on the heights of Fourvière, and offers an exceptional panoramic view of Lyon. Six sculpted chairs are located at the 4 corners of the park, annotated with poetic sentences. This garden in Lyon is a mixture of art and greenery. The access to the park is located via Place Abbé Larue.

On the way down from the Notre-Dame de Fourvière basilica, you can access the Parc des Hauteurs. Footbridges will take you up to the banks of the Saône river. Take the opportunity to stroll in the Rosary garden. This pleasant place is ideal for a picnic on the grass during your stay in Lyon.

Where to shop in Vieux Lyon district?

Where to go to the market in the old city of Lyon?

Every Thursday morning from 6am to 12:30pm there is a well-known organic market on the Place Commette in Vieux Lyon area. Few merchants meet every Thursday, but the market remains very busy. A piece of advice: don't go there too late, you might miss fresh products. Fruits, vegetables, cheeses, honey, meat, bread, soap... there is a wide variety of products to choose from.

The craft market takes place every Sunday on the Quai de Bondy. Many craftsmen and artists exhibit their creations and sell them.

Where to buy the best pralines in the old city of Lyon?

During your stay in Lyon taste the pralines, which are an unmistakable Lyon speciality. Our choice number 1 is automatically directed towards the "Boulangerie du Palais" situated on the Palais de Justice street. In this bakery, you will taste by far the best pastries and praline buns. The "A la Marquise" pastry shop also offers delicious praline pies and brioches. This bakery on rue Saint-Jean is also a tea salon. We recommend that lovers of traditional pralines go to the "Pralus" boutique located at 27 rue Saint-Jean in Old Lyon to bring back sachets of them as souvenirs.

Where to buy antiques in Vieux Lyon ?

The Broc'Jo antique store seems to be the ideal place to buy antiques in Old Lyon. A real Ali Baba's cave, Broc'Jo has all kinds of objects to the delight of collectors.

The Diogène bookstore, located at 29 rue Saint-Jean, offers a multitude of books. Recent books, old and collectible books, second-hand comics...you could spend hours leafing through the books between the shelves of this bookstore.

At least 10 music shops are competing in the Vieux Lyon district. Musicians will love this area and will be able to buy new or second-hand instruments, CDs or vinyls. The Boul'dingue store sells CD's and vinyls ranging from jazz to rock and French chanson.

Where to eat in Vieux Lyon quarter ?

What are the best local restaurants to eat in Old Lyon ?

It is said that the best local restaurants called "les bouchons" are located in Vieux Lyon. This legend is real. We have selected for you the 3 best "bouchon" of Old Lyon to be tested.

The restaurant "Chez Grand-Mère" is well named because you can taste the best Lyon specialities concocted in a traditional way. Don't forget to taste the pike quenelle, you might miss something.

The restaurant "Notre Maison" is also a must-attend restaurant in the old city of Lyon. Their motto says a lot about the chef's philosophy; "customers in a hurry, don't come in". Here, we come to taste delicious andouillettes or quenelles in generous quantities.

For a less cautious but more elegant meal, go to the restaurant "Aux Trois Maries" in the street of the same name. This "bouchon" offers revisited Lyon specialities that will seduce you. Special note for the black pudding pie !

Where to have a drink in Vieux Lyon?

Whether you are a fan of good beers or cocktails, you will find a bar to your taste in Vieux Lyon. Many Irish pubs are located in the old city of Lyon, especially near the Quai de Bondy. Irish atmosphere, darts and a good atmosphere are waiting for you in the pubs of this district. A trip to the "Elephant & Castle" or the "Antidote pub" is unavoidable if you enjoy these festive atmospheres.

If you are a lover of good wines, we deliver our best address in Old Lyon. At the "BMD bar", you will taste delicious wines from the region and around the world. This bar also prepares delicious aperitif dishes.

The "Bémol 5" is a bar where you can sip your glass of wine while enjoying a jazz concert organized on site. After a certain hour, the bar turns into a restaurant and allows you to extend your concert in front of a good Lyon dish.

Where to brunch in the old city of Lyon?

Having a brunch in Vieux Lyon is one of the activities to check on your to do list. Indeed, during your stay with friends or your romantic weekend in Lyon, take a moment to have a brunch. Our favorite is the "Gadagne Café", within the walls of the museums of the same name. Duck breast, local cheese, salmon slice... nothing is missing in this coffee. A little something extra; you have lunch with a view of the hanging gardens and enjoy a green setting for brunch.

How to get around from Old Lyon ?

Old Lyon is a mainly pedestrian district. Therefore, we advise you to leave the car and use public or alternative means of transport.

Arriving by train at the Vieux Lyon

Cycling in the Old Lyon area

About 8 Vélo'v bike stations run along the banks of the Saône river. You can rent a bike easily and access to the Vieux Lyon streete in few minutes. Be careful at rush hour in the narrow streets of the Old Lyon. Remember to download the Vélo'v application to find the nearest station.

Getting around by metro in Vieux Lyon

Metro D serves the  Vieux Lyon district (Cathédrale Saint Jean stop) and will allow you to easily reach the Presqu'île and the 3rd arrondissement of Lyon.

Getting on board on a Vaporetto boat from Vieux Lyon

As fun as it is convenient, the Vieux Lyon district is served by a river shuttle called Vaporetto. Boarding takes place on the Bondy quay and allows you to reach Bellecour and Confluence by water.

Moving by bus in Vieux Lyon

Buses only run on the banks of the Saône river but do not enter Old Lyon. Thus, the C20 bus stops at the Vieux Lyon station. Buses 31 and 40 serve the Romain Rolland stop. Buses C14 and C3 stop at Saint-Paul (be careful, both stops have the same name but are not exactly at the same place).

Where to park in Vieux Lyon ?

Parking spaces are available along the Saône. In addition, an LPA car park is located at 25 Quai Romain Rolland.

Travelling by funicular in Old Lyon

From the Saint-Jean district in Vieux Lyon, you can access the F1 funicular that takes you to Fourvière. The stop is called Vieux Lyon Cathédrale Saint-Jean.

As rich as it is warm, Vieux Lyon is a historical landmark that will seduce you during your city-trip in Lyon.

I AM A TRAVELER

I AM AN OWNER